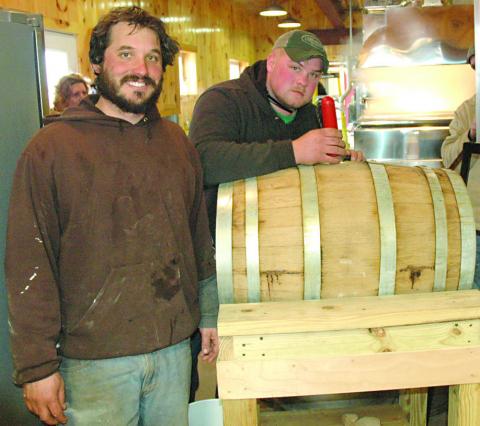 John Garigliano get some help from Evan Austin to fill a charred American Oak bourbon barrel with Catskill Mountain syrup. Garigliano plans on making 12 barrels of the syrup this year to see how the new product does.

High above the hills of Grahamsville, the owner of Catskill Mountain Sugar House is anxiously awaiting the real start of spring.

For although the calendar says so, the warmer days and cooler nights which are the lifeblood of the maple syrup run have yet to arrive in full force.

“Our maple orchards aren’t thawed out yet,” John Garigliano, Catskill Mountain’s general manager, said. “Usually we are at 70 percent of crop and right now we only have 20 percent.”

But as the weather slowly begins to turn, Garigliano is hopeful that his sugar house will produce close to the 15,000 gallons of syrup its aiming to produce this season, his fifth year of operation.

To accommodate the increase in taps, Garigliano also increased his reverse osmosis capacity, which will allow him to take more water out of the sap and thereby decrease boiling time – and save valuable fuel at the same time.

Despite the rugged winter, Garigliano is still optimistic.

“What sap we had has been very good quality – some of the highest sugar content we ever had,” he said. “I spoke with quite a lot of people throughout New York and Vermont recently and the weather has affected everyone.

“That doesn’t mean we won’t get two good weeks and turn it all around,” he said.

“Last year we put more pipe in the woods and this year we did the same again,” he said.

The pipe, which is actually vacuum tubing, allows Garigliano to transport sap from trees under vacuum and deliver the sweet liquid to 10 pump houses throughout the property and on the Guenther Farm on Thunder Hill.

From there it is either trucked to or piped to the sugar house off Glade Hill Road.

“We also worked hard on our marketing and advertising,” he said.

“We are doing very, very well with that as a matter of fact.”

With new markets throughout the mid-Hudson, Catskill Mountain Sugar House is also shipping its high grade syrup to many restaurants and outlets in the Big Apple.

And this year, on a test basis, Catskill Mountain is putting some of its amber liquid into oak barrels from Catskill Distilling Company, which once held bourbon.

The result – Bourbon Barrel Matured Maple Syrup. The result is a tasty blend of maple syrup with a touch of bourbon taste.

The label reads, “Organic Maple Syrup sourced from Catskill Mountain Sugar House’s 800 acre farm nestled in the beautiful Catskill Mountains of Upstate NY is gracefully aged in charred American oak bourbon barrels provided by our friends at Catskill Distilling Company. This collaboration results in Catskill Squared, a unique and delicious maple syrup with the nose of a fine bourbon and a taste second to none.”

“We are looking to make 12 barrels this year,” Garigliano said. “It’s kind of a new thing. We’ll see first if it catches on locally and then, who knows how far it will go.”

Maple syrup production is a growing industry, especially on the technology and demand side.

Garigliano says he employs about the same number during the boiling season, with six guys in the woods, two drivers and two in the sugarhouse.

The locally-produced maple syrup is on sale locally or people are invited to visit Catskill Mountain at 227 Glade Hill Road in Grahamsville to see the operation in progress for themselves and pick up a bottle of the syrup.